London is a whole different category from Paris and Italy. I found it to have an old charm but with a modern twist. Many architectural landmarks such as Big Ben and Westminster Abby among the City Hall’s tilted structure, the Strata Tower, the Leadenhall Building and the 30 Street Mary Axe (The Gherkin). A very beautiful city indeed. It was quite chilly when we arrived in September – around mid 40’s. There were less tourist and traffic which was great. We were centrally located at the Central Park Hotel within proximity to late night restaurants, pubs, bus stops, four miles from Kensington Palace and two miles from the Queensway Train Station in Hyde Park.

The Central Park Hotel has a very modern look. Our room was large with a double bed and decent decor. The restroom was very comfortable and clean. Overall the hotel, rooms and facilities were well maintained. The staff was helpful with their suggestions of things to do, where to catch the bus, best places to eat and much more. Our only complaint would be that the WiFi signal was weak, therefore we were not able to connect – not that we spent much time in the hotel anyway, other than to shower and sleep. The hotel has a restaurant which serves a full English breakfast. They also serve lunch and dinner. The breakfast was quite good for a great start to the day and the small bar area for cocktails after a hectic day of sightseeing was available.

There are so many restaurants in the hotel vicinity that it was hard to choose where to eat. From Asian food, Mediterranean, Italian and so many more. Not being too familiar with the English culture and only knowing the Fish & Chips as native to the British, we wanted to try their version of it. As recommended by the shuttle bus driver, we headed to the Black Lion Pub.

The Black Lion Pub was located at 123 Bayswater Road. It had an old charm decor and pleasant environment. The staff was polite but not very helpful when it came to asking questions about the menu. We had to place our order at the bar, were given a number, and a waiter brought the food to our table. Our meal consisted of Fish & Chips with tartar sauce and peas for about £12 each plus the appetizer, lager and dessert. The fish was good, the chips and peas – well they were just chips or French fries, as we call them, and peas. I’m not a beer drinker but the beer was good and didn’t get me bloated (very important)!

Bella Italia Trattoria located on 55 Queensway in London was another location where we had dinner. Dinner and wine was good and for a group of four was around £100, which was not bad considering we had appetizers, salads, entrée, desserts and wine.

Kam Tong Cantonese and Asian Restaurant located at 50 Queensway in London. It was a very cold night (low 40’s) so we did not want to go too far. The place was warm and cozy. The service was very good. We had duck Peking for dinner – not my favorite, but my husband enjoyed it very much. Total spent was approximately £40. I did enjoy the Sake which warmed us up in a way that made me feel hot, as in sweaty hot. We ended the night walking around Queensway carrying our warm sweaters and jackets instead of wearing them.

Great British Fish & Chips located at Westminster Bridge Rd in London just across from the London Eye. A fast food restaurant that serves fish & chips, burgers, hot dogs and chicken nuggets. The fish & chips was good enough to fulfill your hunger and about £20 for two.

We purchased the London Pass a few months before our trip. The pass included the entrance to the Big Tours Bus, Thames River Cruise, palaces, museums and many other places, as well as restaurant and gift shop discounts. The cost was about £85 for one day. I think it was well worth it. Since we purchased it a few months before the trip we were able to review the guide-book and plan an itinerary of places to visit to make the best of our short stay, thus taking full advantage of our trip. 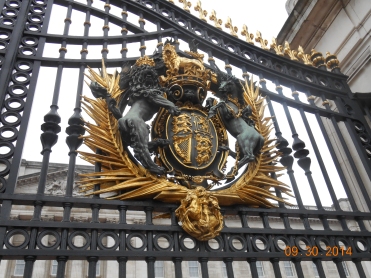 Awaiting the Change of Guards

You can’t go to London and not experience the Guard Mounting at Buckingham Palace. So, we hopped on the Big Tours Bus at Marble Arch and it dropped us off at the Queen’s Gallery Buckingham Palace. The changing of the guard ceremony began at 10:45 a.m. and lasted about 30 to 45 minutes. The guards are on duty from 24 to 48 hours with 2 hours on sentry duty and 4 hours off. I’m still amazed at their discipline – how straight face they maintain themselves.

One of the places we visited was the Tower of London located on the north bank of the River Thames. The Tower was built in the 1070’s and was used as a palace, a fortress, a prison and even housed wild exotic animals. It attracts over 3 million visitors a year. Coincidently, we visited when the Blood Swept Land and Seas of Red was displayed. The art display represented the 100-year mark since Britain’s involvement in the First World War. The red ceramic poppies filled the Tower’s moat between July 17 and November 11, 2014. Each one represented a British military killed during the war. The entrance fee was included in the London Pass.

The Tower Bridge is one of the most famous bridges in the world. We were able to explore its hidden treasures, learn about its history and walk among its beautiful architecture and glass floor. This tour was also included in the London Pass. 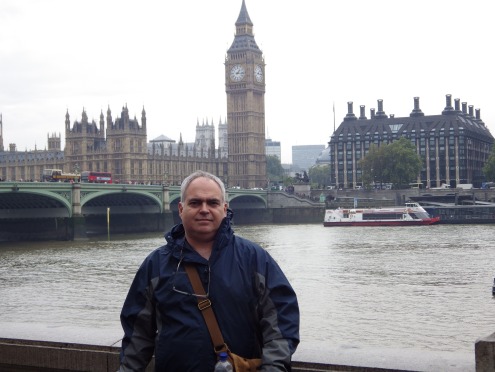 Houses of Parliament and Big Ben 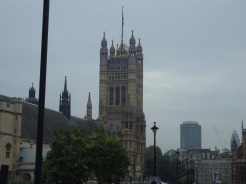 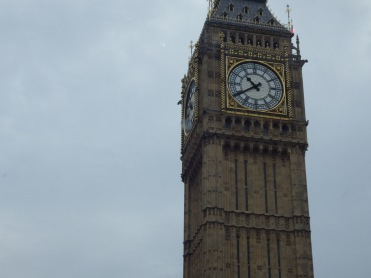 Our time in London was short and we were not able to do the Houses of Parliament tour other than an outside photography – especially of the most famous Big Ben. In a way that’s good. It means we will make another trip to London in the future.

We enjoyed a Thames River Cruise, also included in the London Pass. The Thames River is the longest river in London expanding some 215 miles long. We enjoyed the views of Houses of Parliament, Big Ben, The Tower of London, Shakespeare’s Globe, Cutty Sark, HMS Belfast Battle Cruiser, Millennium Footbridge, The Royal Courts of Justice, Tower Bridge, Tate Modern, Canary Wharf, and the London Eye. The entrance fee to these places was included in the London Pass with the exception of just a few. 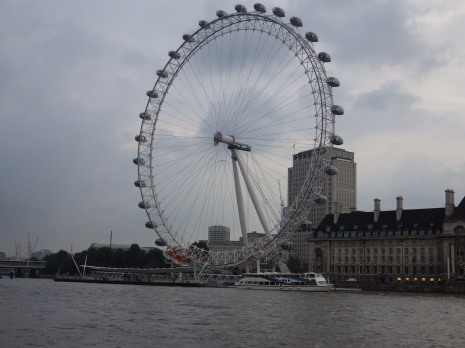 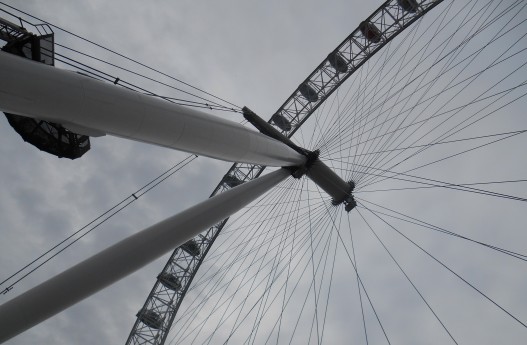 London Eye from below 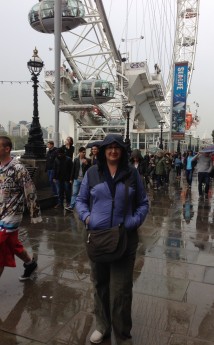 As close as I will get 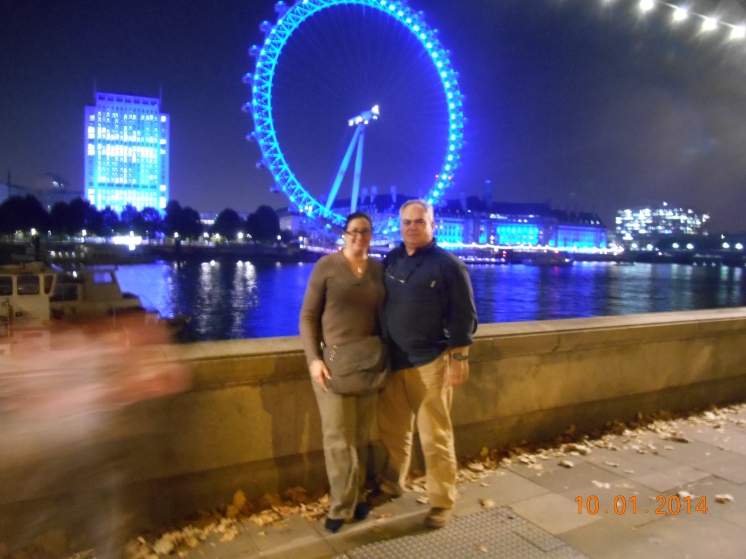 The London Eye is gigantic and very impressive. It is located on the south bank of the Thames river . The London Eye was launched solely for the 2000 new year celebration as a temporary structure. However, it has gained such popularity that it is now a permanent structure of London. I did not ride the London Eye. It was too big and intimidating and I’m not that brave. However, I enjoyed having photos taken standing near it. That’s as close as I got without fear kicking in.

Aboard the Big Tour Bus, we toured the vibrant and bustling Trafalgar Square learning about its purpose and history. We came across a giant blue rooster statue – very out of place. We then learned that the rooster and its color represents Britain’s defeat of France at the 1805 battle of Trafalgar which gave the square its name. The bus offered three routes stopping at different places. We did all three routes and enjoyed hopping off and on at different locations and visiting all that caught our interest. 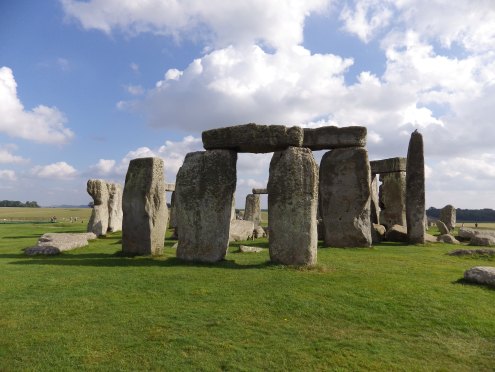 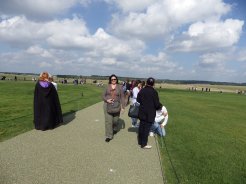 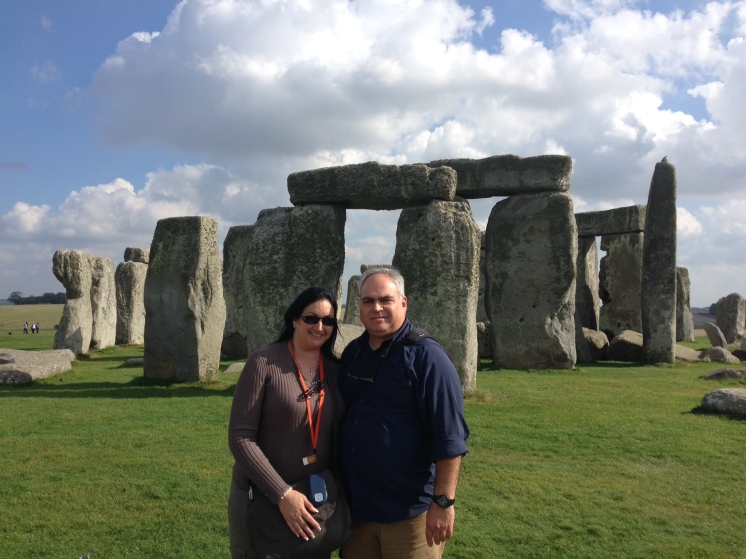 One of my favorite places in the U.K. and one of the many wonders of the world is Stonehenge in Wiltshire. We took an escorted tour to this phenomenal monument. It was a very impressive site yet so serene and lots of energy. A prehistoric site with so many stories and unanswered questions is something no one should miss. We encountered a few people dressed in long gowns or as ferries participating in ceremonial celebrations throughout.

We did an escorted tour of the Windsor Castle, which is still an official residence of the Queen. Did you know that the Windsor Castle is the biggest house in the world at 484,000 square feet? I didn’t either. Also, it has about 1000 rooms. We then toured the State apartments and the 14th century St. George’s Chapel – a beautiful medieval church architecture in England established in 1348. 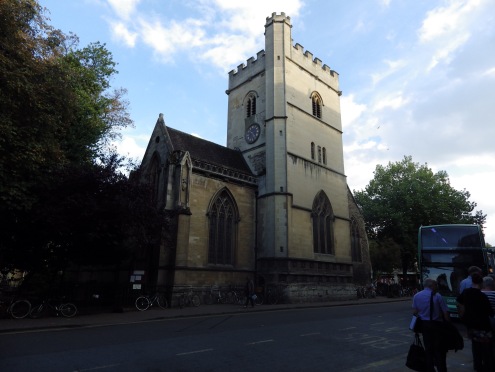 Our last stop was at Oxford city which is home of the world’s famous Oxford University dated back to the 12th century. Various locations in Oxford were featured in the Harry Potter films, such as the Bodleian, New College and Christ Church.

And, even though we were so close to Kensington Palace, we kept so busy that we never made it in time to tour it. There is so much going on in England that two and a half days is not enough to explore its fascinating places. It was a great trip indeed – such history and beautiful places. I’m sure I left out many places to visit while in England. Can you tell me what other places you suggest we visit next time around? I’m looking forward to your comments.

2 thoughts on “The UK Demands More Than Two Days”